As I’d never been before, I picked up a map from the tourist information office on the High Street before having a look at the impressive Mansion House next door.

There are four bronze tree sculptures by Richard Perry on the street outside the Mansion House which I gather (from a few internet searches) weren’t well liked locally when they were installed – but I rather liked them.

The Mansion House and the Minster were the only two subjects I’d planned in advance, but a wander round town revealed quite a lot of nice Georgian architecture that I’d not been expecting.

I’d had a look at the Minster (or Minster Church of St George to be precise) earlier in the afternoon but it had looked uninteresting under a cloudy sky so I’d just had a nose round inside intending to return for dusk.

However, before the sun set the sky cleared and and some late sunshine illuminated the tower.

After the sun had set I had a wander along the nearby waterfront where lights were starting to come on at the modern Doncaster College building. 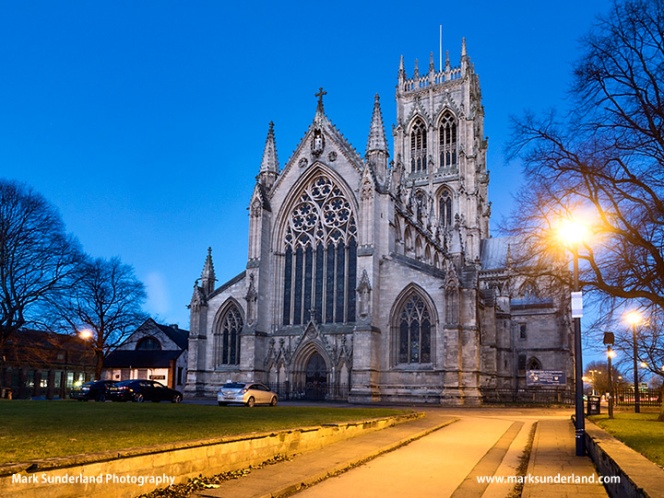 Finally I returned to the Minster once more for a few final twilight shots.  The street lamps in the churchyard were nice, but the floodlighting didn’t come on – which I had been expecting, though the building still looked great in the fading light.

To see all of the latest images, please visit www.marksunderland.com/latest